Duchenne muscular dystrophy (DMD) is an X-linked genetic disorder characterized by progressive muscle degeneration caused by the absence of dystrophin, a protein connecting the muscle fiber cytoskeleton to the extracellular matrix through the cell membrane. Symptoms which appear in boys by 2 years of age include a progressive decline in muscle strength and loss of muscle mass starting in the legs and pelvis extending to the arms and neck.

Several animal models are available but the most widely used in DMD research is the mdx mouse model (JAX Stock # 001801). The mdx mouse model carries a nonsense point mutation in exon 23 resulting in the early termination of translation of dystrophin expression. PsychoGenics maintains a colony and has extensively characterized the mdx line in house. Utilizing motor challenges to amplify fatigue, animals display muscle weakness at an early age, a phenotype which can be used to screen novel therapeutic entities. 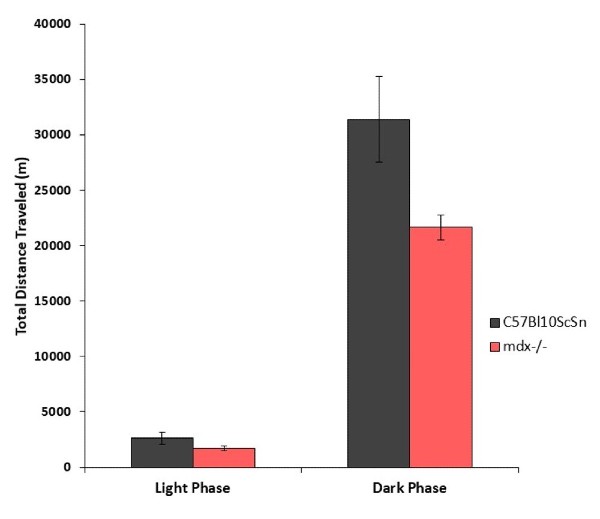 Figure 2A-B: Animals ran on a horizontal treadmill in which speed was gradually accelerated to 12m/min in a 40-minute period. 12 weeks old mdx mice show a decreased time traveled at the fastest speed (A) and require a longer rest time (B) to complete the task compared to WT controls animals.

Figure 3: This assessment is comprised of three consecutive steps. The first consists of recording motor performance in an open field for a fifteen minutes session. At the end of the trial, each individual animal is placed either on the fatigue challenge apparatus (5 minutes static hindlimb position) (solid grey and red bars) or in their home cage for 5 minutes (no challenge) (striped bars). Finally, each animal will return immediately in the open field for another 15 minutes to record horizontal and vertical mobility, and mdx mice exhibited greater fatigue than WT control mice.