Aggregation of misfolded proteins is a feature common to many neurodegenerative diseases. Parkinson’s disease is a progressive movement disorder which is characterized neuropathologically by the presence of intraneuronal Lewy Bodies (LB) and Lewy Neurites (LN). Misfolded and aggregated alpha-synuclein (fibrillar alpha-synuclein) is the major component of LB’s and LN’s. 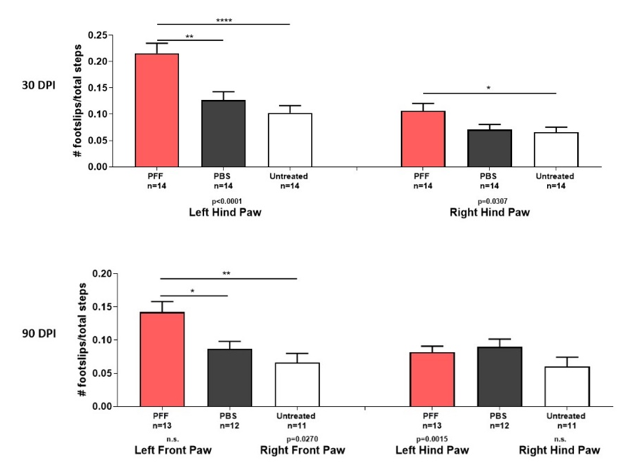 Figure 1: Latency to turn and number of footslips on tapered balance beam at 30 and 90 days post unilateral striatal inoculation of PFF. Mice were required to successfully complete a minimum of two beam traversals in a testing session (max of 2 minutes each session) in order to be scored for number of footslips. The most significant deficits in footslips are observed in the contralateral hind limb – the Left Hind Paw. [Sample size=14, Male B6C3F1/J mice (8-10)].

Figure 2: Shorter latency to hang on the wire hang test at 30 and 90 days post unilateral striatal inoculation of alpha-synuclein preformed fibrils. Mice were allowed to grip the steel grid for as long as possible. Mice were given three trials with an ITI of 2-3minutes. [Sample size=14, Male B6C3F1/J mice (8-10 weeks) mice per treatment *** P<0.05, Unpaired t-test].

Figure 4: Analysis of action potential-independent glutamatergic transmission of striatal SPNs in the dorsal striatum using whole-cell patch clamp electrophysiology in brain slices. 2-3 month-old wild-type mice received an unilateral intrastriatal injection of either phosphate buffered saline (PBS) or human α-synuclein PFFs and aged for 180 days. Brain slices were then prepared from PBS versus PFF injected mice and (mEPSCs) were recorded in the presence of 1αM tetrodotoxin and 40 αM picrotoxin (n=30 neurons from 6 mice per group). (A) Frequency of mEPSCs was significantly reduced in the hemisphere injected with PFF mice, whereas in panel (B) the amplitude of mEPSCs was unaltered. The robust alterations in mEPSC frequency suggests a potential loss of glutamatergic synapses or decreased probability of transmitter release in striatal SPNs exposed to PFFs.